Brushes With by Kristina Marie Darling 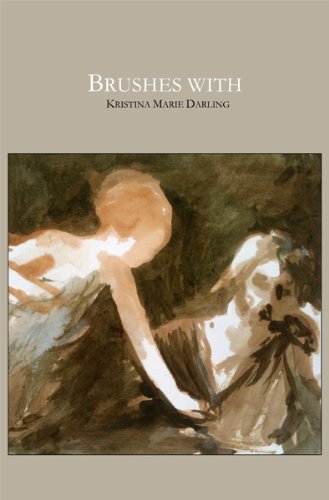 Urging the poet to be concrete and specific, William Carlos Williams says, “No ideas, but in things.” This became my mantra as I read and re-read Kristina Marie Darling’s Brushes With, which suggests through haunting

paragraphs of prose poetry, footnotes, and even photographs, the violent demise of love between a husband and wife. Love has ended and I as a reader am left with the seemingly disjointed shards. Repeated imagery of physical things, however, gradually served as clues, particularly as I began to re-read the book several times in an attempt to create a gestalt picture of the bits and pieces I’d been given along the way.

The table of contents is equally elusive. A list of nine sections hints at what’s to come: Cartography, Migration, Feminism, Antarctica, Landscape, Martyrdom, Utopia, Spectacle, and Appendix A: Illustrations. These provide a barebones route through the ensuing text. Formally, each section is structured similarly to its eight counterparts. Following the title is a few lines of prose poetry told from the point of view of the jilted woman. Almost halfway through the book in the “Feminism” section, this poetic voice mentions, for the first time, a divorce and a mistress. A few pages later in “Landscape,” we learn that the speaker is a poet herself, for she says, “You told me, tilting your pretty head, how my pastoral elegy failed to move you.”

At the end of this exchange, the man mouths the word melancholia, which initiates a footnote: “A state of mourning for the lost object.”

The book itself is a compilation of lost objects: A compass gone awry, a map of constellations (of dead stars, no less), an unraveling dress, a house fallen into disrepair, statues of martyrs, frosty windows, ashes. These images recur in Darling’s scant fifty pages, woven into the counterpoint of poem and footnote into a third, unwritten narrative. Some of these objects appear in the relatively direct tone of the speaker of the poetic paragraph. Others are hinted at in seemingly unconnected footnotes, many of which are not even signaled in the primary text.

They stand alone, many on otherwise blank pages, suggesting a narrative to which we are not entirely privy. The last several pages of the book consist only of such notes.

Then the appendix provides two photographs: one of a burned room and another of dead stars. The photos reiterate the recurring imagery in a different medium and add a new dimension of temporality to the book. It felt almost like a literary Hail Mary: the speaker/poet/author makes one final attempt to provide evidence of moments that transpired either directly or indirectly over the course of the overall narrative.

Awash in imagery but adrift in the narrative, I found myself temporally disoriented, clinging to each and every word as a hint. What should I make of the recurring motifs? What about the photos at the end? What am I supplying in the vacant space created by the footnotes that refer to a lost text, or to a text never written?

Yet I think that is Darling’s point here, for us to attach our own meaning and experience to this suggestion of a story. It is a phenomenological exercise to read and reread this book, searching for meaning within the text but more importantly supplying meaning from without.

One line stood out over my many readings that served as a map to deciphering the book. The speaker of poetry in “Feminism” says: “What is love but a parade of memorable objects, a row of dead butterflies pinned under glass?”

Darling suggests this parade of objects in her fragmented, skeletal narrative. The reader’s job, then, is to flesh it out, to look at those butterflies pinned under glass, and to construct a story even more whole than the sum of its parts by connecting those objects to the ideas they are suggesting. The brilliance of Darling’s form and structure in Brushes With is the freedom she gives us to do just that.

Having grown up in Missouri, Kentucky, and Virginia, Mark Elberfeld earned a BA in English and Art History at the University of the South in Sewanee, TN. He holds an MA from the Bread Loaf School of English at Middlebury College in Vermont, and an MA in Creative Writing from Georgia State University, where he served as fiction editor of the student-run journal New South. Mark taught sixth grade in suburban Washington, D.C. and in Budapest, Hungary. Now residing in Atlanta, Mark serves as president of the nonprofit Gabriel Center for Servant-Leadership and as board member and trainer for the Center for Emotional Intelligence.